What is the Nintendo Switch?

The Switch is the latest console from the Japanese video game giant Nintendo.

Released worldwide in 2017, the versatility of the Switch has helped it to remain incredibly popular and outsell all competitors in 2019. Consisting of a portable tablet and two detachable controllers (also known as Joy-Cons), the console can be connected to a TV but it doesn’t have to be – it’s designed to be played both at home and on the go. Each Joy-Con can be used by itself, making it easy for gamers to play together.

In September 2019, Nintendo launched the Lite version of the Switch, which is an entirely handheld device but otherwise works just like the standard version.

Nintendo has a reputation for producing family-friendly consoles and games – and the Switch is no different.

The Switch is very easy to set up and the menus are clean and simple to navigate. It’s also considered the most age-inclusive console on the market, as a majority of games are suitable for younger players (PEGI 3-7). Many of Nintendo’s own titles for the Switch have extensive multiplayer options which can appeal to both children and adults.

Joining your child for a round of Super Smash Bros. or asking them to show you around their island on Animal Crossing can be a great way to get insight into their world – and the kind of content they’re exposed to. Taking an interest in your child’s hobbies will let them know that they can come to you if they come across anything that concerns or upsets them.

Parental controls don’t eliminate risk completely. Like you would with any piece of tech, ensuring your child can recognise and respond to challenges is the best way of helping them flourish while they’re gaming.

However, parental controls can be a useful tool for families who are looking to prevent accidental spending or stop their child from being able to access inappropriate content.

For the Switch, all you have to do is to create a parent/guardian account on your child’s console and download Nintendo’s parental controls app from the App Store or Google Play Store. Some of the main features of this app include:

Research from the Oxford Internet Institute suggests that what children do on screens is more important than the amount of time they spend – but that doesn’t mean you can’t choose to set limits.

Through the app, you can set up daily quotas for your child. When their time is almost up, they will receive a notification which encourages them to finish what they’re doing. You can also enable a feature called ‘Suspend software’ which will automatically quit the game and turn the console off when the time is up. 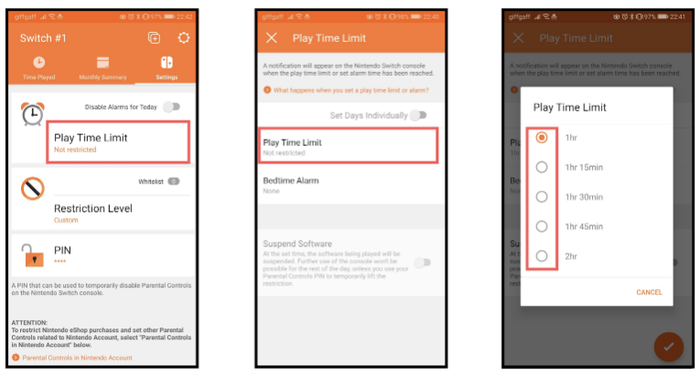 Bridge Academy Trust is a charitable company limited by guarantee registered in England and Wales with company number 07663795.